Address from the Chairman
develop strategy
About Us 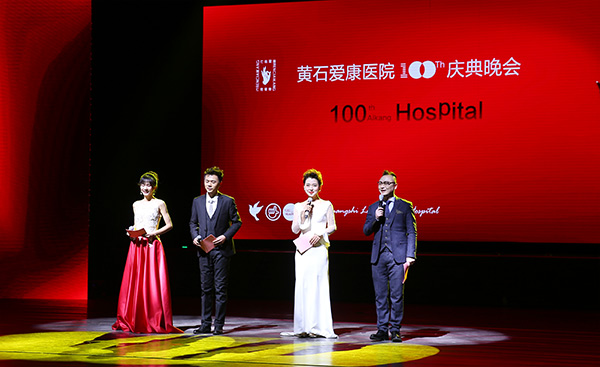 Dr. Wang Dong (First on the left) is having a friendly conversation with Academician Li Peigen (Middle). 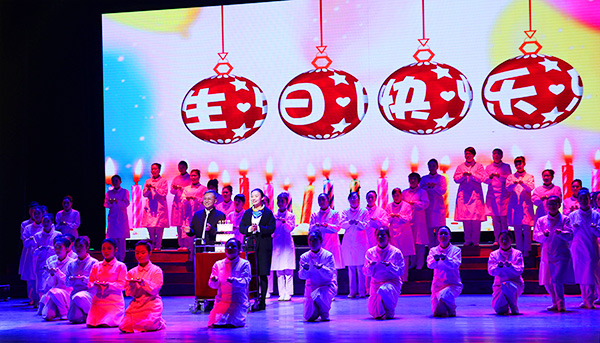 Dr. Wang Dong lit the birthday candles for Aikang’s 100th anniversary.
Huangshi Aikang Hospital’s celebration party for 100th anniversary was started with Dr. Wang Dong lighting a birthday candle. Dr. Wang said in his speech: "In last September, Huangshi Aikang Hospital smoothly passed the on-spot evaluation for a National Class-A3 hospital. After one hundred years of wind and rain, such an answer made me feel very gratified. Today's hard-won achievements have resulted from the unremitting efforts of the generations of Aikang people and also hard work of every Aikang family. Since the Hospital’s reform, we have achieved great success, which was impossible if there is no patient who has been supporting and trusting us. I would like to express our sincere thanks to all the people who care about the growth and development of Aikang.” At the end of the address, Dr. Wang also promised, on behalf of the whole staff, that they will continue to attach great importance to the construction of medical quality and safety, improve the medical service level, and provide more effective medical treatment and humanistic services for patients. 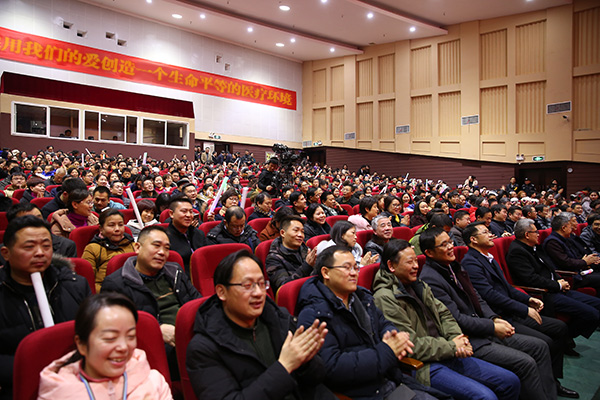 On-spot Audience of Celebration Party for 100th Anniversary of Huangshi Aikang Hospital
Academician Li Peigen also impromptu walked onto the stage, made comments on Aikang, and praised Aikang’s unique corporate values and culture, "The Chairman of Beijing Aikang Group, Mr. Wang Dong’s dedication to running hospitals, which is like religious devoutness, has been making everyone full of respect to him. By virtue of his origin to run hospitals and constant pursuit of life equality, Mr. Wang Dong has entrusted the mission to create a medical environment of life equality with our love to Aikang employees who always act from the perspective of benefiting patients and with patient satisfaction as the starting point of their joint efforts. I hope that Aikang Hospital will move forward with the original intention in the future.” 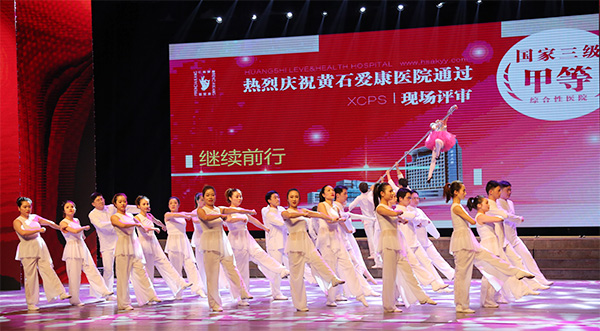 Musical Drama "Keep on Advancing"
In the joyful song and emotional words, the light and shadow were interwoven, and the song and dance were lingering. Huangshi Aikang Hospital brought an auditory and visual feast to the people of Huangshi. The Hospital’s propaganda film, like a magnificent picture, depicts the magnificent development of Huangshi Aikang Hospital since its establishment in 1917. Generations of Aikang people’s feelings to remember their original intention, benefit mankind and save persons, and respect life touched the audience, and also a skilled and talented high-level modern hospital was presented in front of them. Dance "Keep Watching the Blooming of Flowers of Life"
Huangshi Aikang Hospital has established its mission of "creating a medical environment of life equality with our love" since its reform in 2004. This doctrine also has been deeply integrated into the core values of Aikang, transformed the Aikang employees' individual realm, enterprise mind and pursuit into practicing of the rules of "love", deemed "love" as a carrier connecting the hospital and its patients, and become Aikang people’s guide to act. During the love donation process, 22 patients or representatives of family members received cash assistance. After the love donation ceremony, Chairman Dr. Wang Dong raised his hand, stepped onto the stage, and donated RMB 1 million Yuan as "Aikang Fund of Life Equality" on the spot. His move infected all Aikang people on the site, who also raised their hands enthusiastically to participate in the donation. 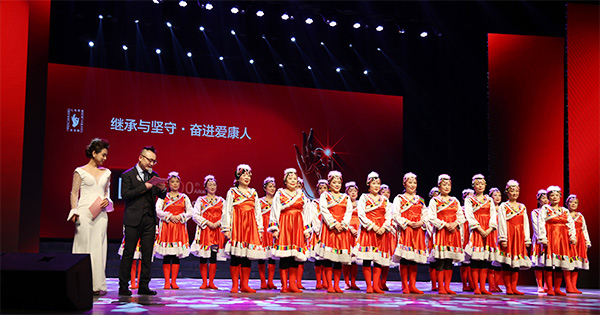 The dance team composing of the clinical experts of Huangshi Aikang Hospital made an excellent appearance.
The clinical experts and functional cadres of Huangshi Aikang Hospital performed the happy dance “Sky Road”; the Aikang community group performed the opusculum "Happiness around" which describes the real convenience brought by Aikang’s high quality medical resources to the community; other hospitals of Beijing Aikang Group also presented splendid singing and dancing performances, which won cheers from the audience. Dancing "Move together all the way"
100 years of wind and rain marked Aikang’s 100th anniversary. In September 2017, Huangshi Aikang Hospital passed the expert panel’s on-spot evaluation for a comprehensive Class-A3 hospital, organized by Hubei Provincial Commission for Population, Health and Family Planning, and become the first private Class-A3 comprehensive hospital in Huangshi and also a model for successfully building into a private Class-A3 comprehensive hospital among domestic private general hospitals.
Chu Peng, General Manager of Aikang Cloud Technology Company, an upgrade platform of health services for Beijing Aikang Group to enter into the big health industry, briefly introduced the benefits and convenience of Aikang Cloud for the public health management and also presented exquisite gifts to the audience and guests on the spot.
This is a gathering of new and old medical practitioners for a warm remembrance of the past years, and also is a journey to the future for the imagination and longing for a better future. The celebration ended with the singing and dance performance "Memorize the original intention".
As a model of Patient first, 100-year Aikang Hospital has drawn its blueprints and it's time to sail. In 2018, Beijing Aikang Group will embark on a new journey of the second 100 years, and Huangshi Aikang Hospital will steadfastly continue to shoulder social responsibility as own duty, adhere to the social public interest as own purpose, deem patients satisfaction as its basis of service, dedicate to the social public welfare activities, and uphold its service philosophy of “great physician and equal lives”, undertake the mission of "creating a medical environment of life equality with our love", rely on the strength of Beijing Aikang Group radiated throughout the country, and improve the health of people in central China with its strong team of experts, advanced medical equipments, exquisite medical technology, and service concept of patients first. 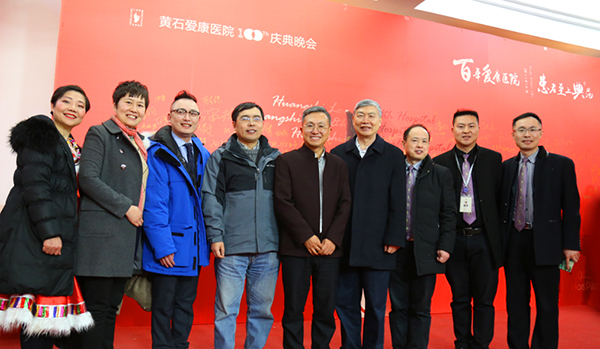 A group photo was taken at the end of the celebration.
Huangshi Aikang Hospital’s celebration activities for its 100th university will continue till June, and several regional academic exchanges and a large industrial academic activity radiating central China will be held next so that famous experts, scholars, and industry leaders will be invited to gather in Aikang on schedule. We will see thought and academic feasts.